The Tales of Pedro

Who is Pedro? Why tell his tales?

Pedro’s origins are in oral storytelling. Those stories have been told in Spain for years. Hundreds of years.

Later, his stories would come to the Americas and he would receive many names. Pedro Urdamales (in Mexico, Chile, Guatemala), Pedro Ardimales, (El Salvador) Pedro Malasartes (Brazil) Rimales (Argentina, Bolivia, Colombia, Peru and Venezuela) was a storytelling trickster known for his mischief and his wit.

Pedro’s victims are usually the rich, the powerful, or their foolish followers. In his stories, he knows that it is not the complexity of the trick but his victim’s desire for easy gain that deceives them. He uses their weaknesses against them. Now that’s a trickster!

The Tales of Juan Bobo 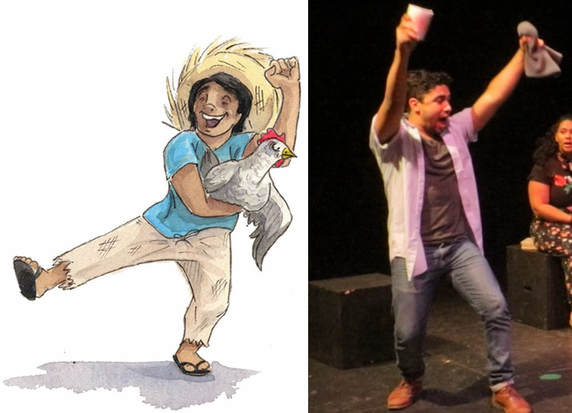 Who is Juan Bobo?

Juan Bobo is a trickster of Puerto Rican folklore and has been around for centuries. Juan’s stories involved him roaming the countryside moving from adventure to adventure, and mishap to mishap.

Often thought of as a fool who gets by using his lack of brains, Juan is not dumb. It’s his naiveté that leads leads him from mistake to solution, often without him ever realizing it.
​
Juan is a boy who is led by his heart. As a society, we could use more people who are led by their hearts.

At our first rehearsal our director, Rodrigo Bolaños, asked the cast and crew all how we identify as Latinx. We went around the table explaining where we came from, where our families came from, and what that meant to us. All together, the eight people sitting at the table represented Mexico, El Salvador, Ecuador, Bolivia, Peru, Puerto Rico, the Dominican Republic and Honduras.

Personally, Eight Tales of Pedro is a show I had to give myself permission to write. I was raised in the California suburbs. I never learned Spanish. People hear “Garcia” and expect something of me that I don't always live up to.

Years ago, I fell in love with the Pedro Urdamales and Juan Bobo stories and adapted them for the stage. But what did these short tales have to do with now? I shelved the stories, knowing that someday the inspiration would appear.

I never expected to be inspired by people screaming “build the wall,” or to be questioned about my own citizenship by strangers. But it happened. These people didn’t see me as a guy from the suburbs who didn’t speak Spanish. They saw me as “brown.” In their eyes “brown” had little to offer.
​
Eight Tales of Pedro is a response to that. We are in a time when pride in our heritage is more important than ever. I believe we need a hero to remind us all that there is honor, there is family, and there is hope. Pedro and Juan are those heroes.